Posted 10 years ago by Taylor Peck 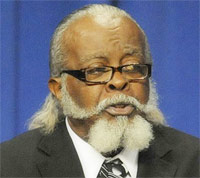 Jimmy McMillan is the founder of the Rent Is Too Damn High Party, a New York based political party advocating lower housing costs for all Americans. Mr. McMillan is a Vietnam Veteran, former postal worker and six-time New York gubernatorial candidate. He is adamantly against federal bailouts for banks and corporations and believes that lowering housing costs will ease poverty and raise tax revenue. He sat down with us to go a little more in depth on his stances.

The name of your party is The Rent is too Damn High Party and you have stated that you are against higher costs of living for renters and homeowners. If elected, what would you do to lower housing costs for all americans?

The government bailed out General Motors with $49 billion in taxpayer money which made every taxpayer a 61% shareholder. So why are you paying a mortgage? Why was your car repo’d? Why are you repaying a student loan? This is an issue than none of the other candidates will talk about because they do not know what the government did. What about any type of protection for the people? The Rent is Too Damn High Party realizes that they are not doing anything to help the people. They are doing things for themselves to make them look good.

The Obama administration recently proposed requiring all health insurance companies to provide birth control to women free of charge. Do you agree with this?

Its already been paid for under the program I have proposed. The office of the president is supposed to be bi-partisan. Some people are for issues like birth control and abortion and some people are not. You can’t choose sides. When it comes to abortion and gay marriage this is a bi-partisan conversation. The president of the United States should not take a position on these issues.

So, as President, you would not take a position on any social issues?

As president you have to be focused on economic issues. You should be worried about the American people having a roof over their head, food on the table and money in their pockets. How are they going to survive when there are no jobs? How am I going to help create new businesses?

Jimmy McMillan is not a skit from Saturday Night Live or Comedy Central. I don’t have a lot of money. I am running this campaign with money I get from retirement, no one is giving me any money. I am speaking from a perspective no one else can see.

I was caught in a rainstorm last week. I was sitting in my car watching the rain fall on my windshield. I see rain different from you. I see the rain as the tears from the people who are suffering and I need to help them throughout these economic crises. I am here to help those who are hurting.